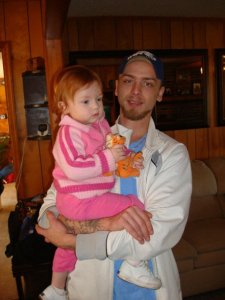 Brother & His Daughter A Few Years Ago

Most of my childhood memories involve my brother one way or another.

I still remember him at 3, chasing our youngest uncle around practicing his ninja moves on him because someone thought it was a good idea to give him a karate costume. Watching that scene in my mind, it was pretty doggone cute and funny, but then I was just glad he was attacking our highly amused and much stronger than he was uncle rather than my scrawny little behind. 🙂

I recall my kid brother at 7, with that classic gap toothed grin, chattering up a storm at everyone who entered the pool hall and bouncing around the pool table whacking the balls in right and left, earning the nickname “Little Lightning” for both his prowess at the game of billiards and the fact he was always talking and moving at a rapid pace.

I can see in my mind’s eye my crazy 12 year old brother, soaring over fences, propane tanks and woodpiles he was jumping all over the farm with our Blue Heeler dog. He was all arms, legs, speed and energy…and guaranteed that dog would never make a good city pet. 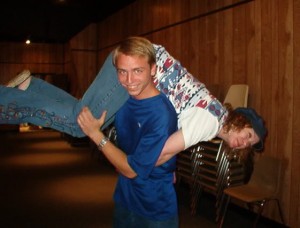 I have memories of my bottomless pit of a growing brother at 16, sniffing around the kitchen to see where I hid the batch of cookies he smelled from all the way outside, then happily devouring all of them when he found the stash. That kid could (and still can, the brat! LOL) eat as much as he wanted and not gain an ounce.

I see my brother as a man, when he held his beautiful new daughter in his arms and beamed at her with pride and wonder. She opened a whole new part of his heart the moment he laid eyes on her, and it was amazing to watch. 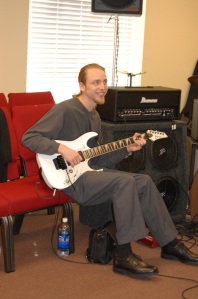 I remember walking down the aisle to become my husband’s wife, to the sound of my talented brother strumming beautifully on his guitar exactly as I’d requested.

No matter the ups and downs life brings, I remember.

Life is a gift. Celebrate. Happy birthday, my one and only forever kid brother!